How To Eat Newah Bhoye The Right Way

Newah bhoye is a popular part of Nepalese cuisine and belongs to the Newah ethnic group who are the indigenous people of the Kathmandu valley.

Newah culture has such a deep relation with food that if you met a Newah, the first greeting they would say is, “ja neh dhuna lah?” which translates to, “Have you eaten your rice?”.

As you know by now, Newahs take their food seriously.

So What Is Newah Bhoye?

Newah bhoye means “Newah feast”, but despite the name this is no ordinary feast!

Featuring over a dozen delicacies the feast begins with seating guests cross-legged in a line on a sukul or straw carpet on the floor. The line is usually in a hierarchical order according to the diner’s age.

Warning: It is best to cancel all your appointments and be comfortably dressed since the bhoye takes almost one to two hours to complete!

How Should Newah Bhoye Be Eaten?

As mentioned earlier, Newars take their food very seriously, and the Newah Bhoye is no different. In fact, there is a very specific way that this feast needs to be served and eaten.

The Bhoye starts with the laying of lapte (leaf plate) in front of each seated guest.

First a handful of chiura or beaten rice is served on the lapte by bharins (servers), sometimes with a small helping of spicy fried soybeans, chhoyela (boiled or barbequed meat which is then marinated with cumin, salt, chilli, fenugreek seeds, ginger and garlic paste), and fried ginger and garlic.

Aloo achar, a spicy potato salad is put on the left side of the plate next to the chiura. This is made up of diced boiled potatoes, small green beans, carrots, radish and/or cucumber, red and green chilli, and fenugreek seeds. But mind you, the bharin needs to put it in such a way that it doesn’t touch the chiura!

Following this, a thick gravy of water buffalo meat is served over the chiura, after which the guests may begin to eat. The gravy softens the chiura which makes it easier to eat.

A spoonful of black eyed beans is then served which is eaten with chiura by the guests.

Next comes the specials, which is completely optional in Newah Bhoye. This usually comprises of chicken soup or mutton soup. This is served to signify the higher status of the family and can be eaten in the same way as water buffalo meat if you have some chiura left or separately like aloo tama.

Bhutan (no, not the country) is the next dish to be served, which is basically fried intestines of water buffalo. After that saag or green leafy vegetables are served. Both of these dishes are eaten individually.

After all the guests have eaten everything on their plates, the bharin serves pau kwa or sour soup, which is made of lapsi or hog plum, in the used bowl of aloo tama. This is given to help guests digest the mountain of food they have already eaten earlier.

Dahi or frozen yogurt is served as dessert which is only served an even number of times to each guest, since even numbers are considered subha or good. This dessert can also be eaten with chiura which is served again.

Last but not least, the sisapusa which is a mixture of vegetables such as radish, cucumber, carrots, and seasonal fruits, is served with a pinch of salt.

But wait, you can’t get up yet, not until the eldest diner has risen!

What Drinks Are Served In Newah Bhoye?

But what about the drinks you say? We haven’t forgotten!

There are two kinds of Newah drinks: either one or both of them are served in Newah Bhoye.

The first is ayela, a colorless alcohol made from rice or millet. Next up is thon, a white beer made of fermented rice.

These alcohols are made at home, usually by the grandmother, and can be served even 25 or more years later. As always, the older the alcohol is, the better it is considered.

Is There A Specific Way To Serve The Drinks?

Yep, there’s a certain way to pour these as well! 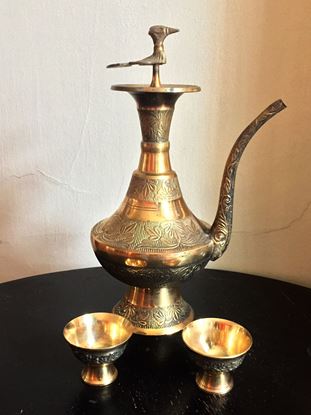 Ayela and thon are served in salincha (a small earthen bowl) or kholcha (a small metal bowl). Usually served by ladies of the house, the drink is poured from a special vessel called anti (a brass vessel with a long narrow snout). The server server starts to pour the drink close to the serving bowl but gradually lifts the vessel to waist height without spilling a single drop!

Warning: You are not recommended to try this if you’ve already had a few cups of either drink unless you want to end up with a laundry bill for someone else.

I Want To Have Newah Bhoye But I Can’t Go To Nepal!

If you don’t have the time to go to Nepal then why don’t you come on down to 121 Uxbridge road, White City, London and let us serve you this magnificent feast! We also have another branch at 23 Boston Parade, Boston Road, London, if that’s more convenient for you.

Even better you can book a table online or order online without getting up from your computer!

Note: It takes a lot of time to prepare this feast so please do expect some waiting time if you decide to order this item.

What If I Am Vegetarian?

Vegetarians need not miss out since we’ve designed our own special vegetarian Newah Bhoye that uses paneer so that you can enjoy this sumptuous feast along with your carnivorous friends.